Technology has come a long way in improving our lives, including in the field of photography. Trail cameras, for instance, are an example of outdoor recreation technology that has become an essential device for lots of different people.

Trail cameras are primarily used by hunters for tracking patterns of animal movements. However, photographers use them as well to take nice photos in tough environments or to spot game that is rare or shy. Regular people can use them too for home security or theft detection purposes.

Whatever your intended purpose is for using a trail camera, know that there are numerous options available. Since trail cameras come in several types and have a multitude of features, it can become quite confusing to choose the best option for you.

Here’s a comprehensive guide to help you figure out which one fits your needs.

What is a Trail Camera?

Trail cameras, also known as game cameras, are primarily used for sport and game hunting. They were first created to record a trip without a photographer being there. They are specifically designed to help you have a hands-off approach to observing animals by capturing their picture and location, which is difficult to do in the wild.

They are weatherproof, can be installed in a distant location to sense movement, capture photos and videos during night or day, and can save the images into an internal memory. This way, you can track which types of animals visit a hunting ground, how they behave, where they go next, and what time they come, among others. This ensures that you don’t waste your time in a location if it’s a dead spot.

Trail cameras are rugged, waterproof, self-powered, self-operated, and designed to fit in nature. They have long-lasting batteries, so you can just strap them on a tree and leave them there for weeks or months.

Other uses for trail cameras include scientific research and security purposes, such as protecting property from theft or animal damage.

There are three main types of trail cameras and they serve different purposes.

A flash trail camera is very easy to install. They are portable and available in many different sizes. They can be used during the day as a normal trail camera, but they are really made for night shots. At night, they switch to flash mode and emit a small flash when the detection zone is activated by movement.

Flash trail cameras have some of the best zoom capacities, producing very good picture quality. Day photos are usually colored while night ones are black and white. These cameras also usually make a shutter noise. Another benefit is that the flash can serve as a warning to possible intruders. However, it can scare off animals as well.

Infrared (IR) trail cameras are a newer invention that looks at the temperature of the surroundings and are typically used in low light or darkness. They come with sensors that automatically switch the infrared function on and off. An infrared light, usually red or white, is emitted when a picture is taken, providing light for the exposure. This light is less likely to scare off animals, unlike the traditional white flash.

When it comes to resolution and sensitivity, no other type of trail camera can compare to the infrared camera, making it a popular choice for scientific researchers. Pictures have high resolution and even night images are very clear. Due to the color of the light though, images are slightly tinted green, red, or white.

They are also easy to install, very sturdy, and designed to withstand tampering more effectively. Their numerous advantages come with a huge price tag though and so they are not that popular for use by small establishments or homes.

Wireless trail cameras have fewer attachments and no wires, which is especially great for indoor use. They are very innovative and extremely user-friendly, especially for tech-savvy individuals.

They have a built-in transmitter that transports images via a 4G or WiFi connection. Once the image is taken, you simply link the camera to the wireless network of your receiving device, such as your phone, tablet, or computer. It can even be set to send you notifications, which is a great feature especially when the camera is used as a security or surveillance device.

They are not suitable for outdoor use though because exposing them to the natural environment can hamper the wireless signals. Their use is also limited to areas with strong internet connection or else the transmission feature will not work. You also need to be wary of potential cyber attacks.

Trail cameras come with a variety of features. Determine which ones are essential to you before you make your purchase.

The type of flash you use is critical because it can either hamper or facilitate your game. The different flash options are as follows:

A hunter and a photographer will have very different needs and requirements when it comes to image quality. Also called resolution, image quality is measured in megapixels. The higher the megapixels, the better the picture quality although we recommend at least 8 MP minimum. However, the higher the megapixel, the more expensive the camera. You also need to consider the type of flash and the camera’s performance at night versus day.

Most trail cameras these days now come with an option to record videos as well. These videos can be as short as 3 seconds to as long as 300 seconds. Some may record only in black and white while others can produce colored ones with HD quality. However, bear in mind that some do not have an audio function and that recording videos takes up more battery life and memory.

How much memory you need will depend on your usage. High-resolution photos need more storage space. However, they take up less space than videos. If you are continuously recording videos, expect that the files will eat up the entire memory in no time. The same goes for cameras that take multiple shots wherein just one trigger produces more than one picture.

When buying an SD card, use the recommended brand and quality to ensure that it will run properly on your camera. Lastly, check to make sure that it is easy for you to switch out the SD card without having to take the entire camera down. You’ll want to stock up on a bunch of them.

While not all trail cameras are expensive, there is a lot of demand for them this makes them a target for theft. We’ve gotten some great shots of people trying to steal our cameras, even climbing trees for them, and then not being able to break our locks. Aside from this though, trail cameras can also be dislodged in the wild even if they are usually sturdy.

To secure your camera, consider how many people may be walking through your area (Don’t worry, we’ve never seen a bear steal a camera before!) and based on that decide on the security options your camera will need. Options range from simple cables to more advanced locks and security boxes. Security boxes protect the camera from direct blows and scratches. Choose one with a foolproof but simple lock mechanism. Anti-theft cables, on the other hand, are used when mounting your camera.

Some trail cameras come with a screen, so you can ensure the angle is right before leaving the camera to run or to easily see if there’s been any activity without having to switch memory cards. It’s also more comfortable for configuring everything. You can also use it to review pictures so that you can delete the unwanted ones immediately.

There are models that come with an LCD viewing screen with HD support. This type of screen is better but also more expensive. Take note that an external viewing screen can make your camera bulky too so make sure to choose the right size for you.

Not all batteries are the same. Use only high-quality ones, preferably those recommended for use in your particular camera. Cheap batteries will cost you more money in the long run. Go for lithium ones, which last longer and work better.

Mounting the camera in the wrong direction

Mounting the camera either facing the east or west is not a good idea because it will be facing the setting or rising sun. Mounting it too high or too low will also not give you high-quality results. Make sure to mount it only 2 – 3 feet above ground and facing either the north or south for optimum results.

Not all SD cards work well with trail cameras. This includes high-speed SD cards meant for digital and high-end point and shoot cameras only, which don’t write fast enough for trail cameras.

The new version of the APEMAN Trail and Hunting Camera captures 12MP crystal clear images and 1080P HD video with super clear sound recording. It uses 940nm infrared flash illumination technology equipped with 26 LEDs. Featuring an IP66 spray water protected design, it is compact and sturdy and housed in a weatherproof plastic case that stands up to the elements.

This camera captures 12 MP images and 1080P HD videos. It has a fully automatic IR filter and 24 Pcs 940NM Infrared low-glow black LEDs. It also features an impressive 0.5 seconds trigger time and has an IP66 Waterproof housing, making it dust-proof, drop-proof, and rain-proof.

This camera features an incredible 0.4-second trigger speed and 0.8 second recovery time with 16MP picture quality along with a new video processor that produces incredible quality 1280 x 720 HD video clips with sound. It also takes night pictures using Browning Trail Cameras Zero Blur technology with eliminates motion blur from wildlife in pictures up to a range of 120-feet at night.

The Moultrie A-30 Game Camera features a flash equipped with 24 LEDs and 850nm nighttime infrared technology, 2 resolution settings (low and high, and HD), and a sturdy case with a weatherproof plastic exterior. It can work with SD/SDHC class 4 cards or higher and can handle up to 32 GB. 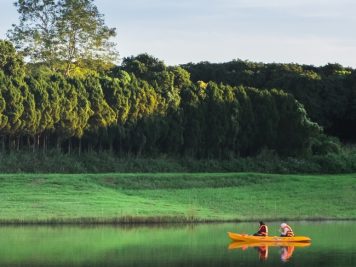 Tandem kayaks are great for enjoying the activity with someone else. If you have decided that buying a tandem is best for you, there are several other factors that you need to look into.