The History of Ping Pong

How I wish I could start this article with a tale involving pagan druids or Buddhist monks. How these ancient figures honed their mystical powers by gently whipping a goose-down sphere between themselves. I wish this tale held some mystical, romantic angle.

The truth of ping pong’s origins is a little more prosaic and engineered than that.

Where Did Ping Pong Originate?

Sadly, the truth is that it was probably invented by British military officers in India back in 1870. These poor upper-class sods were so bored (and possibly terrified to go outside into the blazing heat) that they resorted to hitting a golf ball over a row of books using… you guessed it… more books.

Luckily for you, ping pong tables are now a thing.

It’s rumored that these officers brought this pastime back with them to Victorian-era England where it quickly became a popular after-dinner parlor game. At this point in the game’s history it was going by the name of “wiff waff”, which is so adorably British you couldn’t even make it up.

As far as origin stories go, this is about as humble as you get. But fortunately these posh British folks’ pursuit of entertainment evolved into the accessible, exciting, and super popular game we all know and love today.

It took a while for the corporations to get involved, but, given the game’s increasing popularity, it was inevitable. The term “ping pong” had already been widely used by the time Jaques and Son of London trademarked it and manufactured the first set of specialized equipment in 1901.

By this time the game was being played by a much wider segment of British society, despite the rather high cost of Jaques and Son’s product. No longer only a game for the elite, tournaments became regular occurrences, with some even attracting up to 300 participants.

Other manufacturers stepped in, as can be expected. Since the name ping pong was off limits in branding their products, the more generic term “table tennis” came to be used to describe the sport.

Across the Atlantic, legendary American game manufacturers, Parker Brothers, bought the rights to use the term “ping pong” in their home country and did what they could to popularize it.

The game’s international appeal broadened even further when a Japanese professor visiting England brought the game back home with him. English salesman Edward Shires did his bit to get the rest of Europe involved and introduced the game to the grateful citizens of Austria and Hungary.

By 1922 the game was being played all over England and table tennis’ first official club was founded – appropriately named the “All England Club”. Corporate sponsorship was the next big step and tabloid rag The Daily Mirror stepped up to the plate, organizing a nationwide tournament involving a staggering 40,000 participants.

With this amount of popularity, governance was the next big step for ping pong, and in 1927 Ivor Montague, the son of Lord Ewatthling, founded the English Table Tennis Association. Montague was widely regarded as the most influential figure in converting the game into a fully fledged sport.

In the same year the first world championship tournament was held and won by a Hungarian doctor going by the name Jacobi. His victory was a slap in the face for the sport’s founding nation and one which they only briefly recovered from in 1929 when Fred Perry lifted the trophy. Despite his victory, the Hungarians would dominate the international scene for another decade, mostly due to the exceptional skills of the legendary Victor Barna.

Incidentally, China, the country that would come to dominate much of the modern era, only took to table tennis in the 1930s. The game was especially popular in the communist army during the country’s civil war – something that was even mentioned in Edgar Snow’s famous account of the conflict in his book “Red Star Over China”.

Regardless, the sport continued to develop international appeal and is now enjoyed by an estimated 850 million people worldwide, making it the seventh most-popular sport on earth.

Ping pong’s legitimacy as a global sport was given a massive boost 1988 when it was first played at an Olympic level. The game’s accessibility as a spectator sport was evidenced by the fact that the men’s gold-medal match in Seoul attracted a television viewership of an astonishing 2 billion people.

The History of Table Tennis Equipment

Ping pong equipment has come a long way since those innovative Brits banged a golf ball at each other using golf balls and hardcover copies of “Violent Occupation and Oppression for Dummies”. In the absence of reading material, early ping pong players also resorted to using other household items common during the era. Cigar box lids substituted for rackets and champagne corks (which must have beer far more spherical at the time than they are now) were used as balls.

I’m going to assume you don’t want to resort to these primitive measures, so… We’ve compiled a guide comparing the best ping pong paddles for you.

The very first specialized ping pong rackets were constructed from an oval wooden frame with a sheet of vellum canvas (a type of thin parchment) stretched over the hitting zone. It’s rumored that the ball hitting this filmy material made a sound which contributed to the adoption of the name “ping pong”. Unfortunately, I had run out of vellum just before writing this piece, so I was unable to confirm this.

It was only at the turn of the 18th century that rackets shaped as we know them made their appearance. No doubt grasping the importance of mobility when playing table tennis, a chap by the name of “E.C. Goode” had the novel idea of fixing rubber to a wooden blade and attaching a handle to it. Not content with making only one contribution to the racket’s development, Goode was also the innovator who introduced “pimples” to the rubber striking area.

This was a massive leap forward in the evolution of ping pong. Rackets were now smaller, more mobile and players were able to hit the ball with greater accuracy and speed.

It was to be another fifty years before Japan’s Horoi Sato would supplement the flat rubber affixed directly to the blade with a softer foam rubber. British sporting goods manufacturers, S.W. Hancock Ltd, are credited with perfecting the use of foam and rubber.

This was a massive innovation. Suddenly players were able to impart a degree of spin and speed to the ball that was impossible to generate up until that point. Ping pong became faster, more tactical and started resembling the game that we all know and love today. Players suddenly had to think about more than simply getting the ball over the net onto the opponent’s side of the table. Putting spin on the ball, and defending against a viciously spinning ball, added a whole new dimension to the sport and players needed to adapt fast to this new landscape.

The origin and development of the table tennis ball is somewhat less storied. The aforementioned golf balls and champagne corks were replaced by their celluloid counterparts as early as 1901. Englishman James Gibb discovered these little spheres on a trip to the US. They were initially produced only as novelty items, but Gibb found their weight and consistent bounce ideal for his favorite pastime.

Other than this, the only other major development as far as the balls were concerned happened in 2000 when the ITTF mandated that they need to increase in size from a diameter of 38 mm to 40 mm. The larger surface area increased air resistance and slowed the game down somewhat, making it more accessible to both players and a growing global audience.

As far as the tables were concerned, there’s not much to say. Tables are tables. They need to be flat. A ball needs to bounce consistently on it. No particular person is credited with discovering these facts. Over the years, table tennis equipment manufacturers introduced various features to make them increasingly mobile and stable, but none of these contributed massively to the evolution of the game.

None-the-less – we do have a fascinating article on ping pong table dimensions.

The History of Ping Pong Rules

Little is known about how the rules of the game developed into what they are now. What is worth mentioning is that a major overhaul of both rules and regulations happened in the early 21st century. The ITTF, not wanting to compromise table tennis’ continued growth in popularity among new players and television viewers, made several changes to make it more accessible.

We’ve already discussed how the change in ball size contributed to making the game more watchable. At the same time, the ITTF also mandated that players need to serve the ball from an open palm and tossing it into the air before striking it. This was intended to reduce the enormous advantage afforded to the server.

Serving rounds were also reduced from five serves to two and the number of points per game were reduced from 21 to 11. The latter change was adopted specifically to make matches faster and increase tension and excitement for the viewer. 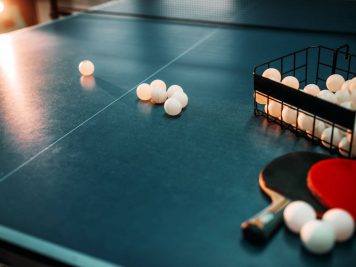 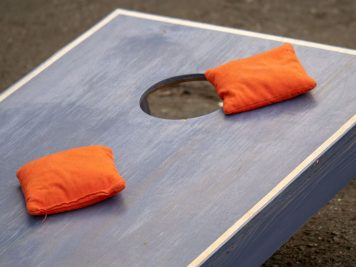 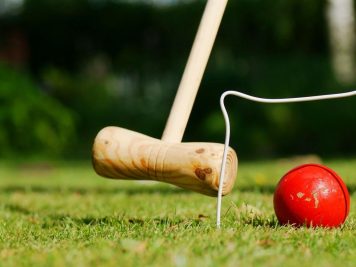