If you just read the title twice or thought it was a trick question, you’re not alone.

Many people think snooker, billiards, and pool are simply different names for the same sport and use them interchangeably.

I don’t blame them either. At first glance, all three table games do look rather similar. Players use wooden sticks to strike a white ball which then hits another colored ball.

But in reality, billiards, pool, and snooker are quite different. They differ in the number of balls used, the color of the balls, the size of the table, and the rules of the game.

If you’re interested in learning more about the differences between snooker, pool, and billiards, you’ve come to the right place. I’ll dive deep into the topic so that by the end of this article, you’ll be able to tell them apart confidently.

But first, let’s talk briefly about the history of cue sports. We’ve got a lot of ground to cover, so let’s get started.

Cue sports dates back to the 15th century in Europe when outdoor lawn games like croquet were popular among the elite. However, inclement weather often disrupted these games.

This is one of the main reasons why indoor activities like billiards evolved. In fact, billiards was the first “lawn” game to be taken inside. The game was played using cue sticks to hit balls on a wooden table covered with green cloth. Since the tabletop resembled grass, it helped to keep the spirit of outdoor games alive.

Over the years, various variations of cue sports like snooker and pool developed from billiards. Each has a unique set of rules and objectives, making them different in their own way.

With this short history lesson out of the way, let’s get down to business – comparing billiards, pool, and snooker.

Billiards vs Snooker vs Pool

I will tackle this section by discussing each game in detail and highlighting their main differences. And I’ll start with billiards since it’s the first cue sport to be played on a table.

Billiards is significantly different from snooker and pool. The main difference is that billiards is played with only three balls on a table with no pockets. 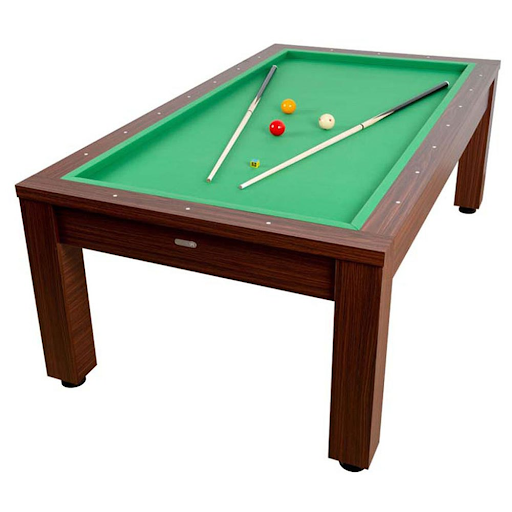 Carom billiards is played with three balls: two white cue balls and a red object ball. One cue ball is completely white, while the other cue ball has red or black dots. This allows players to differentiate their cue balls from their opponents’. Some sets replace the second white ball with a yellow one. That means the white or the yellow ball can be used as a striker ball.

As the name suggests, in order to score points, you need to strike at least three cushions and the two billiard balls on the table during your turn.

The game begins by placing your opponent’s cue ball on the head spot and your cue ball more than 6 inches to the right or left. The red ball is put on the foot spot. 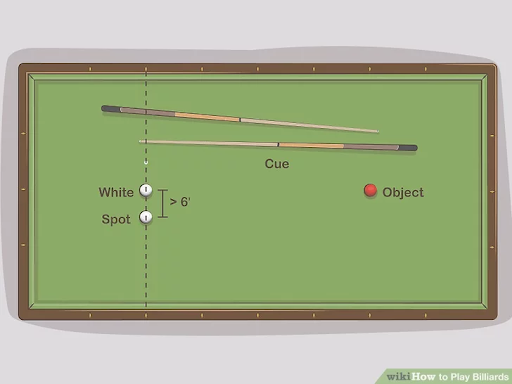 A player continues to play until he misses, after which the other person takes their turn. The game continues with the balls as they appear on the table. The first person to reach a set score wins the game.

Even though carom billiards is typically played on ten foot tables, smaller ones are just as popular, ranging anywhere from a seven to a nine foot table.

Besides their size, billiard tables are usually covered with 100% worsted wool, the best fabric for table surfaces. It offers less resistance than felt, allowing the balls to move faster. On the other hand, pool and snooker tables are typically covered with felt.

Another unique feature of billiard tables is the heated slate below the worsted wool layer. This is an important quality for a tournament table as it helps offer a faster, smoother, and more consistent play. It helps prevent changes arising from temperature or humidity.

Pool, also known as pocket billiards, evolved from the dominant billiards game during the 18th century. The game has developed different variations depending upon the country where it’s played.

The main difference between pool and billiards is that – you guessed it – pool tables have pockets (hence the term pocket billiards was born) and more balls are added into the game.

The complete set of balls for pool consists of sixteen balls, one white ball and 15 colored object balls. Eight balls (1 through 8) are solid colored, while the remaining seven balls (9 through 15) are striped.

The number of balls you place on the table will depend on the type of pool game you want to play. For instance, eight ball pool uses all 15 object balls, while nine ball uses only nine balls.

As more and more pool balls were incorporated into the gameplay, the initial three ball pool branched out into different versions of pool, each with distinct rules.

Today, there are numerous pool games played around the world, such as eight ball pool, nine ball pool, ten ball pool, straight pool, cutthroat pool, etc. It would be close to impossible to discuss the rules for each one in this article, so I’ll discuss the most popular pool game, eight ball.

Eight ball pool is played by racking all 15 object balls in a triangular rack at the foot of the table while the white cue ball is placed at the head spot. The correct way to rack for eight ball pool is to place the black eight ball in the center of the triangle. A solid ball and a stripe ball are put in the two bottom corners. The rest of the balls are randomly placed within the rack. 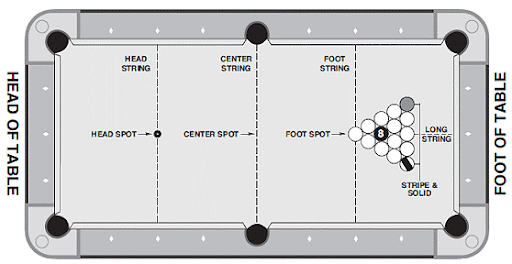 The color of pool balls can vary depending on the country. For example, the British version of eight ball pool is played with one black ball and 14 solid red and yellow balls (seven red balls and seven yellow balls).

Players must use pool cues to strike the white cue ball and sink balls from their respective groups into the pockets on the table. One person will pocket the solid balls while the other will pocket the striped ones.

So what happens if you sink the wrong one? Besides helping your opponent, you lose your turn. Your opponent now gets to play.

Both players must pocket their entire group before sinking the eight ball. The first person to complete this wins.

The length of a pool table can vary between 7 feet and 9 feet. However, the size of a pool table often depends upon the size of the room. For instance, a seven foot table may be suitable for crowded pool halls, while an eight foot table may be perfect for the recreation room inside your home. But professional tournaments typically use the standard nine foot pool table.
No matter the size, all pool tables have six pockets, one at every corner (called corner pockets) and one at the middle of the length of the table (called side pockets). 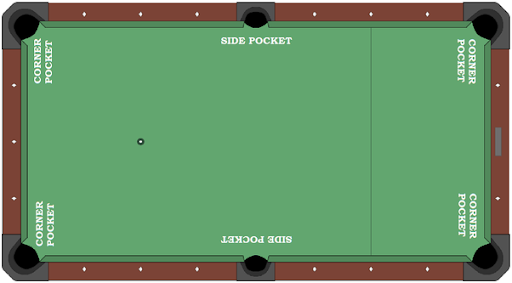 Snooker is the most recent billiards and pool variation emerging in the late 19th century. It remains a popular sport in the UK.

The main difference between snooker and pool or billiards is that snooker is played with a lot more balls – twenty two balls to be exact, out of which a majority are red. The other obvious difference is the size of the table. Snooker is played on massive twelve foot tables – the biggest of all the tables mentioned above.

Snooker is played with one white ball and twenty one colored balls: fifteen red balls and one yellow, pink, green, blue, brown, and black ball.
Every ball on a snooker table has a designated spot, except the white ball, which can be placed anywhere within the D. The easiest way to describe the position of each ball is with the following illustration. 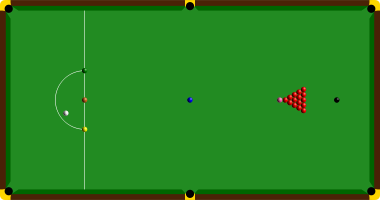 The object of snooker is to score the most points. Since snooker is played on a point system, each ball carries a different point. Players must tally the points of the corresponding balls they pocket. Players begin the game by agreeing on a score that determines the winner.

Players must pocket the red ball first, followed by a ball of any color, then again by a red ball, and so on. Needless to say, players need to keep track of their points during play.

Each time a red ball is sunk, it remains in the pocket. However, the colored balls need to be put on the table in their original spots.

Players continue to play snooker until all the red balls are pocketed and only the colored ones are left on the table. These last six balls must be pocketed according to the ascending order of their value. So that means the first one will be the yellow ball, followed by the green, brown, blue, pink, and finally the black ball.

If a player sinks the wrong ball or cannot take a shot because another ball obstructs the intended ball, he loses his turn. The frame’s winner is the player with the most points.

Multiple game frames are played until one player reaches the predetermined score.

Although snooker tables have a slate bed and are made from the same fabric as pool tables, the two are distinctly different from each other. The first thing you’ll notice is the difference in size. English snooker tables are huge, sitting at twelve feet, which is significantly longer than the standard American pool table, an eight feet or nine feet table.

Another difference between snooker and pool tables is that snooker tables are set lower and have smaller pockets. That’s why many people do not like to play snooker on pool tables.

Snooker vs Pool vs Billiards - It’s a Wrap

A variety of cue games have developed over the years, each with a unique set of rules and equipment. But by now, you’ve got a good idea of the main differences between each one.

Even though pool is a favorite in the US and snooker champions in the UK, it’s your choice at the end of the day. Whether you play snooker, pool, or carom billiards games, choose the one you enjoy and have a good time. 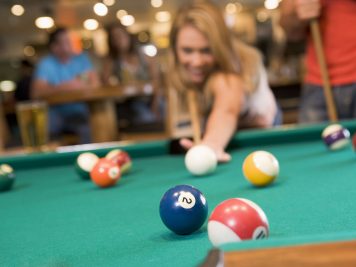 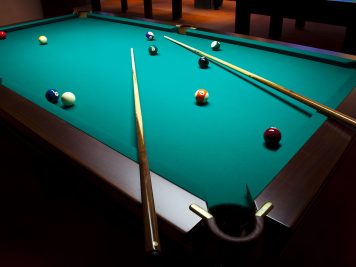