Dart Weights and How to Choose the Right Ones

If you’re getting more into darts, you’ve probably noticed that they come in a number of different weights. This is by design since most darts are trying to find the right balance between being heavy enough to fly and stick and being small enough to be played with.

When dart players talk about dart size, they aren’t speaking about length, they’re talking about the profile it makes on the board. While it seems like a large enough space, every part of a dart board that is not made of sisal fiber is a part that you cannot put a dart into and could result in a bounce out. This includes the metal wire that separates the sections of the board (the “spider”), the staples that are used to keep that cage in place, and, of course, other darts.

The larger your dart, the more space it takes up and the harder it is to put another dart near it, which becomes a problem if you need a tight grouping. So dart players often want the slimmest profile possible. However, the less material you have, the less your dart weighs, and that can be a problem, too. The same applies for soft tip darts and steel-tipped alike.

The weight of a dart affects how it flies.

Heavier darts tend to be more stable in midair and can actually travel further because of the momentum their weight provides them. Think of the difference between throwing a baseball and a ball of paper. Both are the same shape and size, but the heavier one goes further faster. Darts are the same way, with you having to put more effort into throwing lighter darts. And the more effort you put into your throw, the greater the chance that you’ll let your technique slip.

This is why it’s so important to find the right balance. Professional dart players usually use tungsten darts because it’s a dense metal, meaning that it adds weight to the dart while not also adding size.

How Much Should My Darts Weigh?

The rules for international tournament play state that a dart must weigh between 12 and 50 grams. That being said, it’s incredibly rare that you’ll find somebody throwing with darts heavier than 30 grams and most are in the 20-25 gram range. After all, there is a point where having weight stops being an advantage for throwing.

How much weight you like your darts to have is a very personal thing. The simplest option is to try darts in the same style but with different weights to see which ones you can throw the best. The ultimate measure of quality is if you do well while throwing the darts. Remember that your technique can change over time, so you might do better with lighter or heavier darts now than in the future. Keep trying new darts out and don’t be afraid to switch them up if something else feels better.

Realizing that dart weight matters is an important first step. Go experiment and find the dart weight that helps you up your game consistently.

If you need recommendations on the best darts – check out our guide here.

Worried about your darts making too much noise or poking holes in the wall? We’ve also got a guide on the best electronic dart boards. 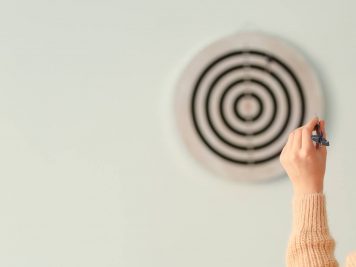 Dart Weights and How to Choose the Right Ones

If you’re getting into darts, you’ve probably noticed that they come in a number of different weights. Read on to find out why. 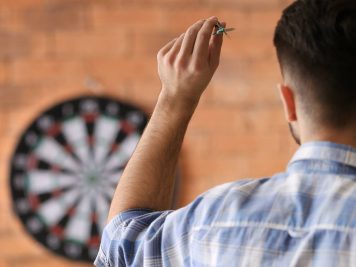 A good set of darts will make you throw so much better (and way faster!). Here's how to find the best soft tip darts for your needs.